Misty has dominated every level of the sport of volleyball, both as an indoor volleyball Champion (two high school State Championships at Newport Harbor High School, 1991-1995 and one NCAA Div 1 Championship at Long Beach State, 1998) and as the greatest beach volleyball player in the history of the game.

Above and beyond Misty’s achievements in her sport, she takes great personal pride in making a difference and impact in the lives of others less fortunate. Misty spreads goodwill through her work with Special Olympics and the Make-A-Wish Foundation, as well as many other causes and initiatives important to her.

Looking back, it’s no surprise that this Los Angeles native became a professional athlete. Misty grew up playing beach volleyball at the Santa Monica Pier with her parents, 1968 volleyball Olympian Butch May and Barbara May, a nationally-ranked tennis player. In her adult life, Misty married Major League Baseball catcher Matt Treanor (currently playing for the Los Angeles Dodgers) in 2004 and competed on season 7 of Dancing with the Stars in 2008.
Speaking At
Closing Keynote: Three-Time Olympic Gold Medalist Misty May-Treanor 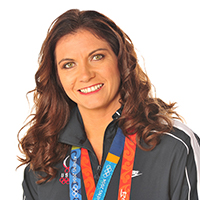