Company
sgsco
Job Title
President, Digital & CMO
Speaker Bio
Rob McCarthy is an experienced brand builder who brings 20 years of client-side expertise to the sgsco collective. Today, he is both responsible for building sgsco’s brands (as CMO), as well as playing a direct role in building our clients’ brands (as head of the Digital Pillar). From 2015 to late 2017, McCarthy played the same role for sgsco’s Design Pillar, which more than doubled in revenues under his leadership.

Sgsco’s Digital Pillar includes THR3D, the company’s global CGI pipeline for the creation of digital brand assets; Kwikee, a leader in the creation, management & distribution of brand content for e-COM and traditional retail connections; as well as the companies digital agencies Armstrong-White & Traffik with studios in Chicago, Detroit, New York, Toronto & Amsterdam. Sgsco weaves all these services, along with its global design and pre-media teams, seamlessly together to deliver the industry’s most robust end-to-end design to print business -- focused on synchronizing the physical and digital shelf for both manufacturers and retailers.

McCarthy spent 18 years at Anheuser-Busch InBev where he held a variety of positions including vice president of Budweiser & VP, Bud Light. While leading Budweiser, McCarthy launched the award-winning “Made in America” music festival with Jay-Z. Additionally, as an early indication of his passion for the role packaging plays in the marketing mix, he developed the “Folds of Honor” Fourth of July program, which delivered Budweiser’s best annual volume and revenue performance of the decade through combining consumer-centric packaging and cause-related marketing.

McCarthy is a graduate of ABI’s Executive MBA program (Instead, France & the Wharton School of the University of Pennsylvania) and is a Six Sigma Green Belt. He holds a commerce degree in marketing and human resources from Saint Mary’s University in Halifax, Nova Scotia, and an honors public relations degree from Mount Saint Vincent University in Halifax.

McCarthy lives in St. Louis with his wife Marilyn and their two daughters, Lauren & Lindsay.
Speaking At
Transparency Track: Shopping for New Tech: How to Avoid an Impulse Buy With No ROI 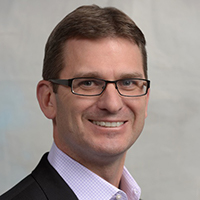